What are some of the Best Diaper Pails for Cloth Diapers?

So, you’ve already made the decision that you want to use cloth diapers instead of disposables. Good for you! Whether you are using cloth or disposable, almost any parent will agree that having a stellar diaper pail is a non-negotiable part of the nursery. While they are not mandatory, diaper pails help contain odor and make for a less-complicated changing routine.

Some people think that using just a trash can will suffice, which it will if you don’t want to pay for the extra luxuries, but most trash cans are not designed to contain odors like dirty diapers. Using a quality diaper pail simplifies the cloth diaper process. Also, diaper pails support reusable liners, which is much more sustainable than using a new plastic bag with each load. Below is a list of some top-rated pails for holding cloth diapers.

If you’d like to learn more about my favorite diaper pail, start with our Dékor Diaper Pail Review article. 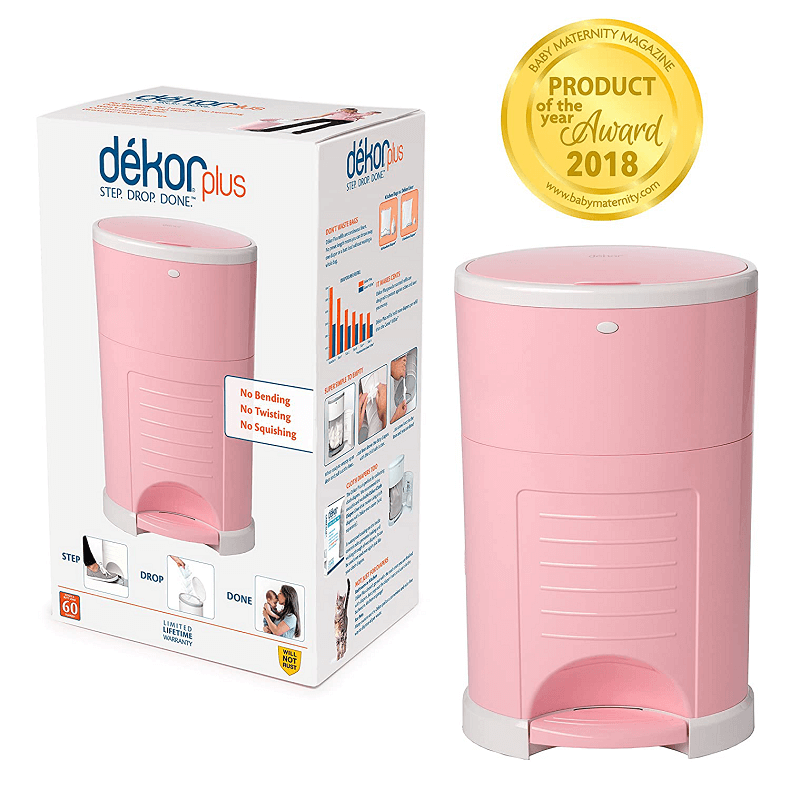 This pail is excellent for new parents looking for a simplistic way to store cloth diapers until laundry day. The Dekor is a hands-free pail featuring a pedal opening system for easy access. This 27-inch pail is a great option for cloth diapers because of its extra room and its compatibility with the most popular cloth diaper pail liners.

Dekor even has their own liners for the pail that is washable and reusable. Reviews say that the pail does a great job containing odor, it is effortless to change liners, and that the material is very durable, so it does not scratch easily. Also, the pail sports a soft-closing whisper lid and a childproof safety lock.

You can buy this product here from Amazon in one of the six colors. 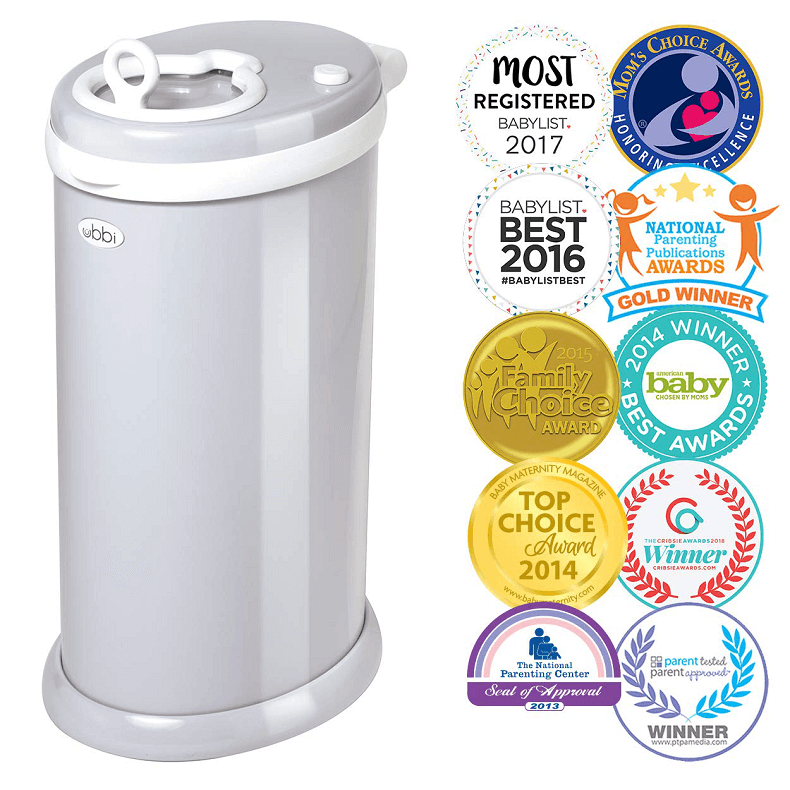 The Ubii pail is critically acclaimed because it is one of the only stainless-steel diaper pails on the market. It does not require a specific liner, which allows for the use of reusable or disposable liners.

This pail works well with cloth diapers because its minimalist design means more room for bulky fabric. Ubii offers a whopping eighteen color options in this design so that the product will be a beautiful addition to any nursery. Since steel is not a porous material, the Ubii pail locks in odors and will not develop a stench over time.

The only drawbacks to this pail are that it does not have a pedal opening system and that it comes at a pretty hefty price tag. Despite this, this pail is perfect for a cloth diaper-friendly modern nursery.

If this stainless steel cloth diaper pail is for you, you can purchase it here from Amazon.

This cloth diaper pail is perfect for the no-frills parent. As a budget-friendly option, the Safety 1st Diaper Pail only needs one free hand! If you are on the fence about whether or not a diaper pail is for you, this is a great option to get to know if a pail will work for your cloth diapering routine.

Customer reviews highlight that this pail does a great job containing odors until laundry day, it is easy to use, and it can be used with a wide variety of liners. This pail is a great place to start because it is wide enough to accommodate soiled cloth diapers that have expanded.

You can purchase it here from Amazon. 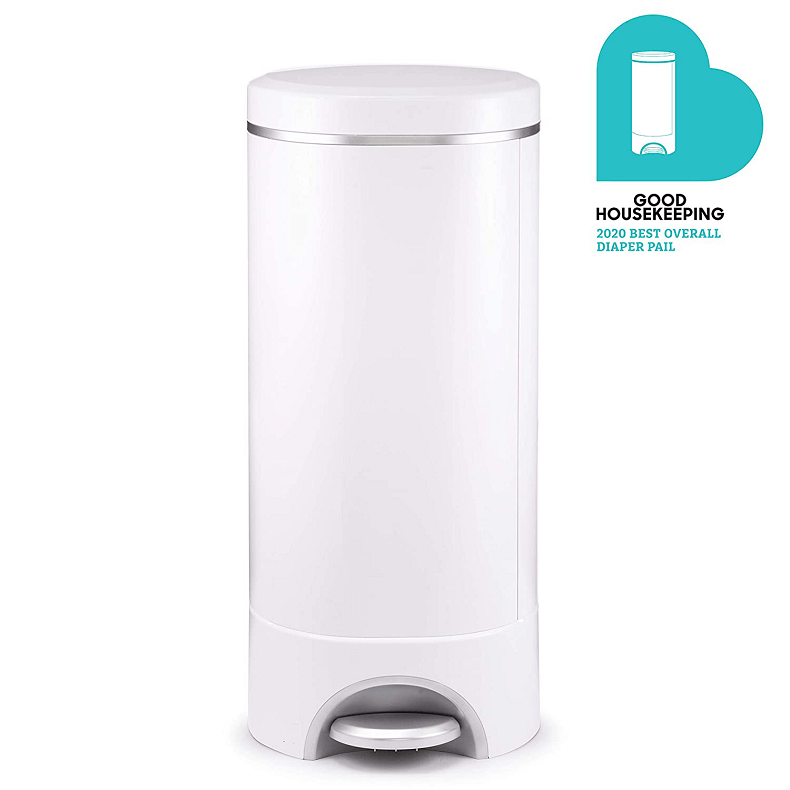 This cloth diaper pail is a tried and true favorite! The Munchkin step diaper pail boasts a large barrel, a top that locks in odors, a pedal for hands-free access. It has earned the Good Housekeeping 2020 award for the best overall diaper pail, which is quite the achievement! Parents who use cloth diapers rave about this pail’s compatibility with reusable and disposable bags, its childproof locking system, and its minimalist design, which fits beautifully in any home or nursery setting.

The only downside to this pail is that it has a pretty high price tag. Some people may think this is an absurd amount to pay for a diaper pail, but this thing is going to last your family a good while! Also, in the reviews section, many parents said that this pail had served their cloth diapers for multiple children. A bonus to this pail is that the company has pledged to plant one tree for each pail sold! Way to double down on environmental friendliness!

You can grab yours and support the environment in multiple ways here. 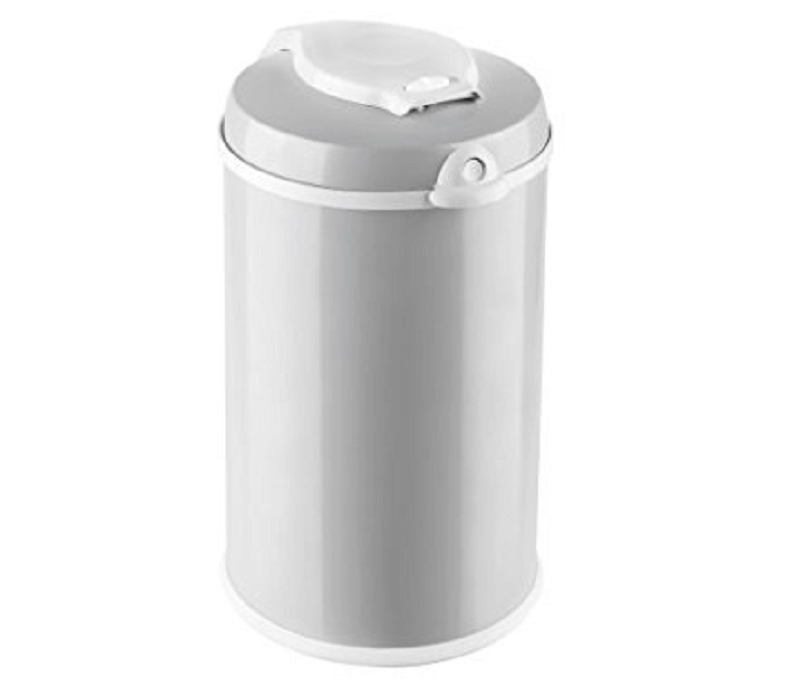 If you’re interested in a cloth diaper pail that is not as large as most, look no further! The Bubula Jr. is a steel pail that locks in odors and can even be converted into a regular trash can after the baby has graduated from diapers to the potty. This is the pail for your cloth diapers if you are working with a tight space, want to be confident that no stink escapes, and want to be able to use any reusable or disposable liner. The Bubula Jr. features an anti-skid bottom, which is safe on all types of floors, and it sports a child lock on the lid so no curious little fingers can get in.

If you want a cloth diaper pail that will hold more than a day or two’s worth of diapers, though, this is not the one for you. The dimensions are only 11×19.5, so keep that in mind if you’re someone who likes to only do laundry once or twice per week. Also, this pail is on the higher end of the price range. But if you are interested in a compact cloth diaper pail that can hold odor like no other, you can purchase yours here from Amazon.

While a diaper pail is not technically required for a cloth diaper household, having one will certainly make your life easier––and less stinky! Don’t forget that diaper pails can almost always be repurposed after baby no longer needs it as trash cans, storage containers, or even pet waste pails. Using cloth diapers can be a good amount of work, but having a phenomenal diaper pail can ease the workload. Remember that cloth diapers are much better than disposables for your baby and the environment, and including a diaper pail that checks all of your boxes will make for an even more positive experience.

How Many Wet Bags/Pail Liners Do I Need?