Writing on this topic will not make me too many friends, but I want to make sure you know that choosing cloth diapers, no matter what kind they are, is an incredibly responsible choice that I will tirelessly support. I’ve also said many of times that these diapers do, in fact, work for many people.

I’ve seen this situation play out more than a hundred times.

Cloth Newb: Anyone knows where I can get some super cheap cloth diapers? I want to see if I like them before spending too much money!

Fact: For some people, some families, these diapers work just fine.

Another Fact: For many people, they turn them off of cloth diapering forever. 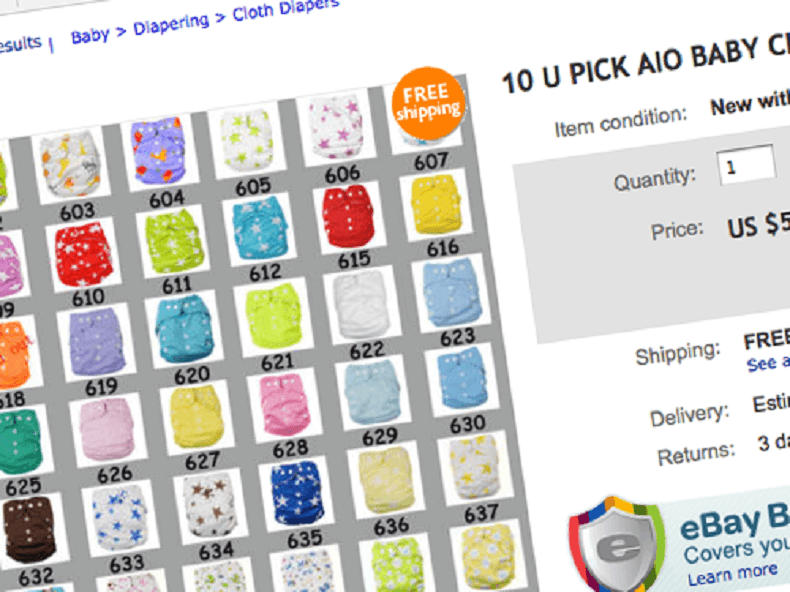 Here’s my very first confession regarding these cheap, mass-produced, four-dollar diapers. I own some (they’re for sale, but they’re in my possession). There, I said it, and with that said, we’re going to start with the “good” points of an eBay diaper.

First? They’re cheap! I would venture to say that they’re the absolute cheapest way to cloth diaper a child–that is,  if you’re looking for the easiest way to get a lot of diapers for with little-to-no money.

Secondly, yes, they do work for plenty of people.

Thirdly, they’re a cloth diaper. I 100% support cloth diapering in its entirety, regardless of the brand or the price tag.

Well, there it is. There’s the good.

These diapers are typically made in China. They’re mass-produced and sold wholesale to many different eBay sellers, most of which are overseas.  Can you be sure of all of the claims the seller has made about the manufacturing processes and diaper functionality when the person selling them to you most likely does not speak your language?

Additionally, the seller most likely knows nothing about the product they’re selling. I, personally, believe that if you’re going to sell a cloth diaper–you need to know what you’re selling, how it works, and who the style of diaper you’re selling works best for.

Shipping times. Simply put: It takes a very long time to ship from China. Most sellers will request a waiting period of over four weeks.

Wrong orders. I’ve spoken to many people who have ordered diapers off of eBay from the sites where you have an image in front of you of 30+ colors of diapers, and you send the seller a note indicating, by number, which diapers you’re wanting.

Many people that I’ve spoken to say that more times than not, you’re not going to receive what you’re asking for. However, since the diapers took an excessive amount of time to make it to you, it’s just not worth it to try and contact the seller with the problem.

Quality. If you’ve ever purchased cloth diapers from a well-known cloth diaper brand, you’re going to immediately recognize a quality difference between these diapers and your eBay diapers.

Most eBay diapers that I’ve seen have threads loose in the seams, they’re poorly and hastily cut, and their microfiber inserts are shedding excessively. Our microfiber inserts didn’t stop shedding for almost four washes. After the fourth wash, more than two of them were already falling apart. While many have said this has not happened to their cheap diapers–they’re generally representing a smaller margin.

Poor Style Selection. The truth is, getting by using only one diaper style is usually unheard of. Pocket diapers, the ones you’ll find on eBay, don’t work for everyone, and they definitely don’t always work for every situation.

Many people like to keep a selection of diaper styles on hand that they can use depending on their situation. Personally, my family will almost always send an All-in-One diaper to daycare and we’ll use an all-in-two or a hybrid with a disposable liner when we’re out of the house.

Many people, for night times, will use a fitted diaper, an extra absorbent insert, and a wool or fleece cover for super-crazy leak protection. You’re just not going to have that versatility with an eBay diaper.

The reputation of cloth diapering is at stake. Remember that “Cloth Newb” from earlier? Well, let’s just say she bought some of these diapers. She hated them. She opened the package after four weeks of waiting to find a bunch of shotty diapers in the wrong colors that looked cheaper than the perfume in a bar’s bathroom smells.

Additionally, these diapers have a huge reputation of leaking within the first few months of use which causes them to need stripped. Many people complain that their eBay diapers need stripped much more often due to stink issues. Finally, many eBay diaper users complain of rashes due to detergent build up in the poor quality fabrics.

Let me clarify, though. Many of these issues, honestly, may not be because of the diaper quality. They’re most likely due to people using these diapers without having been shown or taught the proper ways to care for them–which you’re not going to learn by buying your diapers from eBay.

Most reputable diaper companies are going to pride themselves on making their diapers easy to use, and easy to care for. Not only will they teach you how to use them and how to care for them properly, but they’re also going to typically have a guarantee on their diapers–just in case you end up having problems.

Additionally, this is not to say that a better known and more expensive diaper won’t be made horribly and ruin cloth diapering for someone as well, so with all cloth diaper purchases, your best bet is to buy small amounts to trial or read plenty of reviews. If possible, go to a nearby boutique and touch and feel the diaper yourself!

The effects that off-brand and cheap diapers have on small businesses. This is where I’m going to get on my soapbox for a minute. If you take nothing else from this article, please recognize the importance of this one point.  Please, support small businesses. Yes, this includes those who sell on Amazon. Support honest business. When possible, support local businesses.

There are so many moms and dads out there who are just trying to make a living for their families. Whether that be the mothers behind well known and commercially produced brands or the work-from-home mothers who stay up late after their wee ones have gone to bed to sew countless orders of home-made cloth diapers for their fans to supplement their income and stay home with their babies.

Not only do the diaper manufacturers suffer, but so do the moms and dads who run small diaper shops. I know more than one diaper shop that has gone out of business because they just cannot compete with the price of the “cheap diapers.”

I just want to end with this. Yes, eBay diapers are quick and cheap–but cloth diapering, no matter how you shake it, is cheaper than using disposables. A beautiful, carefully made, twenty-dollar cloth diaper made by an honest individual with a little entrepreneurial spirit is not your enemy. Just remember, that at the end of the day, a $500 cloth diaper stash is cheaper, healthier, and four-million times cuter than a $2500 disposable diaper sinkhole.

Easy Affordable Option For Those Who Can’t Afford Diapers

The Cloth Diaper Market: A Closer Look At Chinese Diapers