In anticipation of the Great Cloth Diaper Change this Saturday, I wanted to share with my readers why some mamas use cloth diapers. Below you will find a guest post from Andrea of One Tomorrow at a Time. Without further ado, here’s Andrea’s post:

When I was expecting, it didn’t take long for me to decide that I wanted to cloth diaper, my baby.  I had done some minimal research before conceiving and I was liking more and more what I was reading about cloth diapering. But telling my “main-stream”, disposable diaper-loving friends what I was up to? That was a different story…

So I became a “closet” cloth diaper hoarder. I scoured Diaper Swappers for information, I entered every single cloth diapering giveaway I could find on Facebook, I stalked online cloth diaper retailers for deals and steals. My cloth diaper stash got bigger and bigger and bigger. One dresser drawer became three, which soon became three drawers, plus three cubbies. I had to start an excel spreadsheet to keep track of how many cloth diapers I had. I saw the UPS  delivery driver just about as much as I saw my own husband. Yeah, I now realize that indicated a bit of a problem. 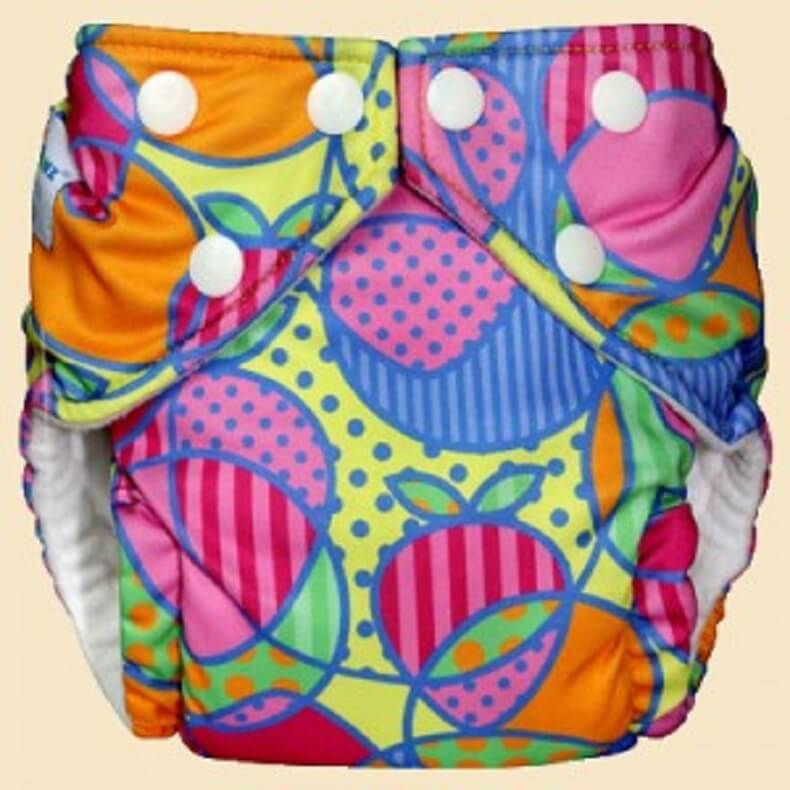 So, imagine my surprise when at my first baby shower I opened a package from my boss filled with cloth diapers and hemp inserts. <GASP> I looked around at my ‘Sposie Friends’ faces to see looks of confusion. One of the braver ones spoke up. “What are those?!” she breathed. I’d been caught red-handed! My obsession exposed! What to do, except to reveal to the world that I had been secretly getting in touch with my bad crunchy self.

I took a deep breath and said it. “Cloth diapers, they’re cloth diapers. I’m going to use them on the baby.” They all continued to look just as perplexed as if I said that they were loincloths that I planned to wear while going topless in Target. So I sucked it up and began to explain to my friends just why I had turned into a tree-hugging-cloth-diapering soon-to-be mama.

Have you walked through the baby aisle at the grocery store lately? Those diaper company execs must be rolling in the dough. One package of 40 diapers costs roughly $11 which would have only lasted us about 3 days until my daughter was 3 months old. That would have been upwards of $90/month on diapers alone! I was able to purchase my entire one-size cloth diaper stash (fitting from 7-35 pounds) for about $600. And that included a diaper pail, pail liners, wet bags for outings & travel, cloth wipes, hemp inserts for nighttime, diaper detergent, a diaper sprayer (to spray solid food poo off the diapers pre-wash) and cloth diaper safe rash cream. So my cloth diaper start-up costs were covered in 6 ½ months of what disposable diapers alone would have cost! And we can use them for future children as well.

I don’t know about you, but I’d like to avoid as many toxic chemicals from coming into contact with my precious little baby’s skin as possible. Disposable diapers are overloaded with noxious chemicals that turn liquid (baby’s urine) into a gel. Great in theory, not so great in reality. When you think about it, would you continue using a product on yourself that routinely caused your skin to blister, peel and turn raw? Then why do parents repeatedly put diapers on their children’s most sensitive parts after battling diaper rash after diaper rash?

Becoming a parent means getting up close and personal with your child’s bodily waste. It’s one of those inevitable truths of parenting that most people don’t discuss pre-baby. So I can assure you that by cloth diapering, I am dealing no more with my baby’s poop than those parents that choose disposables to deal with their baby’s poop. In fact, as I discovered from personal experience, that disposable diapers on my daughter equaled a guaranteed blow-out every time. We’re talkin’ out the diaper, up the back, through 3 layers of clothing, epic blow-outs. She wore disposables for the first 4 weeks of her life & then again for 1 week while trying to heal from a yeast rash. I kid you not she had a poo-splosion at least once a day in disposables. In the 6 months of wearing cloth? Once. I don’t know about you, but I’d much rather “deal” with poop when it’s sitting properly in a diaper containing it, than covering my little girl’s body and clothing.

So I’ve lived to tell the tale of how I broke the news about my cloth diapering ways. And you know what? Some of my friends were judgmental, told me I would stop, wouldn’t want the extra laundry, etcetera, but most of them have supported me and loved me anyway, despite my “unconventional” choice of poo-catcher. And I’m pretty sure I wouldn’t want a friend that didn’t like me because of what I covered my daughter’s {adorable} tush with, anyway.

Quality Cloth Diapers On A Budget