Tara, a cloth diapering mom wrote this excellent article on the cloth diaper vs disposable debate.

A Little About Tara

My husband and I are the parents of three kiddos. My first daughter was born in 2006 followed by our son in 2010. Then just months later we found out our second daughter was on the way and she was born early 2011. I am a stay at home mom and am currently cloth diapering two! I am also a cloth diaper consultant. There really is a system to suit every need and every budget! They are super cute and stylish too (which doesn’t hurt). So if you want to put some money back in your wallet, remove some trash from your garbage, and keep your baby’s bottom happy, cloth is for you!

How Am I going To Pay For All Of The Diapers?

When I found out I was pregnant with my third child, the first thought that came to my mind was “How on Earth am I going to pay for all the diapers?” My two youngest are only 11 months apart; therefore, they were both going to be in diapers at the same time for 12+ months!

I used disposable diapers for my first child and knew how incredibly expensive it could get. I knew there had to be a better way and to start searching the internet for some ways to save some cash for newborn expenses. This is where I ran across cloth diapers. I purchased a few and thus began my journey in cloth.

So how much am I really going to save?

This is somewhat of a tricky question. How much you save with being dependent on what type of disposables you would have used, how long it takes your child to potty train, how big your baby is, how fast they grow, what type of cloth you are going to use, how often you are going to wash. With all that being said, I have done a basic estimate of the costs of disposables vs. cloth.

To set up my cost analysis I used Amazon.com and Walmart.com to determine prices for disposable diapers. Diapers cost less per diaper for the smaller sizes (the packages are larger) and cost more for larger sizes. I used the World Health Association growth chart to determine the average sizes of babies 0-24 months and the CDC growth chart for toddlers 24 months-30 months. This chart helped me determine how long the average baby would stay in each size diaper. I used the average potty training age of 30 months.

For cloth diapers, I used OsoCozy Prefolds with covers for your least expensive option and the average price of $20 per diaper for my most expensive option of All-in-one or Pocket diapers. To determine the cost of electricity and water, I used the amount that my water bill and electric bill have increased since I have started using cloth. I wash daily and have seen about a $7.50 increase in my bills.

The amount you are going to save can vary greatly! You could potentially spend more on cloth than disposables if you used the cheapest disposable and most expensive cloth option, but on average you would save approx. $928 if you were in the median group on both and washed every other day.

If you take into account the multiple child savings as well as the resale value of the diapers there is a clear-cut financial winner of the two- the winner is cloth! There are many more reasons though to choose cloth besides just from a financial perspective. There are environmental as well as health benefits to cloth that we will discuss in the coming weeks.

**This is just a rough estimate of the cost of disposables vs. cloth. Many studies have concluded that you can save far more than this by using cloth. I wanted to provide a very positive outlook for disposables to compare with cloth so that we could see that even with the best possible disposable expenditure that you can still save money using cloth. Check out DiaperDecisions.com to see a more detailed report on the price of cloth vs. disposables. This shows a much grimmer picture of disposable diapers and shows some more expensive ways to cloth diaper as well.

Now we have talked about all the “important” reasons to cloth diaper such as saving money, going green, and the health of your baby. Now I am going to talk about another reason I personally cloth diaper–the cuteness factor!

Disposable diapers turn your baby into a walking advertisement! When using disposables I had to choose which children’s program I wanted to support- Sesame Street, Dora the Explorer, Mickey Mouse, or any other various cartoon creation. If it wasn’t bad enough that my child was forced into wearing plastic underpants, now I was also forcing them into the realm of being a walking billboard.

With cloth the options are endless! I can go for the timeless approach with a traditional vanilla color or go wild with a zebra print or vibrant hot pink! There, literally, is no end to the colors, prints, and styles available in cloth.

I know some of you are saying, “But, I like Mickey Mouse!” Don’t get me wrong, there is a time and place in which Mickey Mouse is a completely fantastic option, but do you want Mickey Mouse every day?

I know when I used disposables on my oldest there was one particular brand that I used all the time. I know lots of mothers that use disposable diapers and swear by one brand. In that case, typically the designs don’t change often. For the almost full two years, my daughter was in diapers the diaper brand I used had the exact same print! She literally wore the same cartoon printed diaper every day for two years! How exciting is that?

Do you wear the same brand, style, color of underwear every day? I know I don’t!

Cloth can just add a little excitement and pizzazz to your baby’s wardrobe.  And not to mention, it is nice to have other mommas stop you in the bathroom at public establishments just to comment on how adorable your diapers are!

Time And Place For Everything

There are also times that you may not want a little cartoon character peeking out from your baby’s diaper.  If your baby is going to be baptized or christened, is this a time you want Winnie the Pooh peeking out to say hello? With cloth, you could choose solid white or traditional looking diaper for these important events.

What about baby portraits? Everyone loves to show off all the cute little chubby thighs, tummy rolls, and flawless baby skin! I know we did most of our newborn photos in just a diaper. With my oldest, I look back at those photos and see her precious little body and cute newborn expressions and then see a big old logo right on her behind! Don’t get me wrong; the photos are still precious and beautiful; however, with my second two, the cloth diapers in the photo added so much more! They look beautiful, and the diaper fits in with everything around it!

We recently took some baby portraits of my littlest two, and I wanted to share some with you! Now could you do these with disposables? 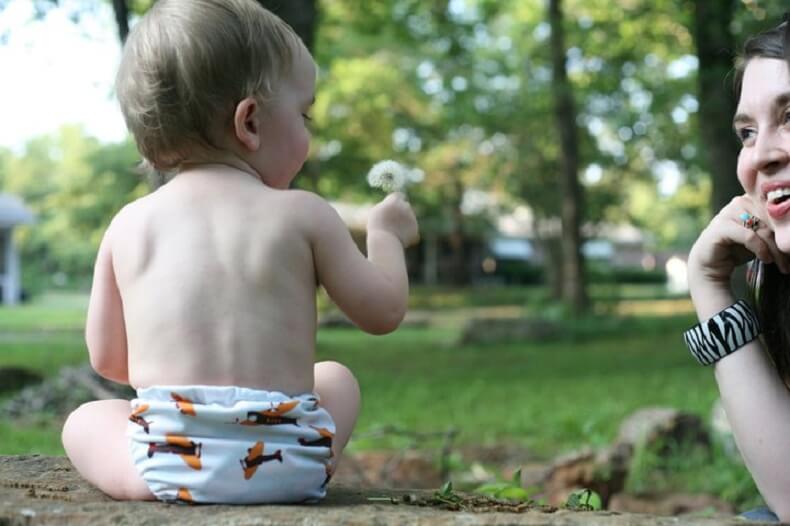 Disposable diapers are well known for their super urine absorbing powers. Many people praise diaper companies for their continued “improvement” in the area of liquid absorption.  True, disposable diapers can hold about 400-500ccs of liquid; this would be about 3-5 typical wettings for a baby. That is quite a lot of urine!

Most disposable diapers do not even feel wet until they have been wet on at least two or three times; therefore, most families use less disposable diapers per day than they do cloth diapers. Is this a good thing? No! Whether a baby is in disposable or cloth diapers, they are going to the bathroom the same number of times. The difference is the mother who has a baby in disposables does not know her child has gone and will (in most circumstances) unknowingly leave their baby in a wet diaper for longer periods of time. “But their skin isn’t getting wet because disposables wick away so much moisture, so does it really matter?” YES!!! Even though the diaper wicks the moisture away from their skin, the baby is still sitting in a diaper that has urine in it. Urine has ammonia. The ammonia is still present in that diaper until the baby is changed. This is one contributing factor to diaper rash for disposable diaper babies.

Another downside to the super absorbing power of modern disposable diapers is that they can over-dry the skin. Not only do they pull urine and wetness into the diaper, but they also pull the natural oils from the baby’s skin into the diaper as well. This can cause an over-drying effect on the baby’s bottom. This again is something that can cause a rash in a disposable diapered baby.

What does this mean??

One recent event that hit the news, U.S. Consumer Product Safety Commission got 4,700 complaints of diaper rash (from Pampers Dry Max) between April and August of 2010 and since has evaluated the Dry Max diaper materials, construction and heat and moisture retention issues, reports AdAge.com. “CPSC staff cannot rule out that there may exist a health concern for some babies,” the statement continued. “Most babies exhibit diaper rash at least once in their lifetime. If parents or caregivers believe that their child is suffering from a rash that they believe to be related to a diaper, CPSC staff suggests that they discontinue the use of the diaper and contact their pediatrician.” Ultimately the study by the CPSC found “no link” between Pampers Dry Max and the diaper rash. However, there were 4,700 complaints? Puzzling, I think so. These were not typical diaper rashes either. Most mothers were complaining of a chemical type burn and even boils.

In conclusion, I would not want to expose my children to any of the potential health risks associated with the use of disposable diapers. At least with a cloth diaper, you know what is in it and that does not include chemicals!

Do Cloth Diapers Leak? Yes! Here’s How To Stop The Leaks

9 Signs You Are a Cloth Diaper Addict

Hemp Diapers – What exactly is Hemp?