See what others are saying about the Dékor Diaper Pail on Amazon.com by clicking this link. Then be sure to read my Dékor diaper pail review below and find out why I don’t use the included liners.

In my many years of diapering, one of the major pain points I kept running into was where to keep my dirty diapers as they waited to be washed. I used various buckets, wet bags, and laundry baskets in my attempt to find a good solution, but all of these options had major downsides.

Solid plastic buckets trapped in moisture, which led to intense urine odor and sometimes even mold (especially in the summer heat!).

Regular laundry baskets had better airflow, but there was no hiding the smell of urine as the diapers collected in the basket. And no one wants their house smelling like ammonia with a hint of poop. Yuck.

Wet bags contained the smell better than any of the other options, but the ones I had were too small and better suited to being kept in the diaper bag for outings.

I wanted a diaper pail that would hold a decent amount of diapers, keep the smell of soiled diapers from permeating the house, and be easy to clean. Even better, I wanted it to be made of a material that wouldn’t absorb the smells and other nastiness involved with dirty diapers. A girl can dream, right?!

The problem is that traditional diaper pails are designed solely for disposable diapers. There are many that have unique or cool plastic bag systems, but plastic bag systems would be really awkward, if not altogether impossible, to use with cloth diapers.

You can imagine my intense joy, then, when I found the Dékor diaper pail! Not only could it be used with cloth bags, but the brand actually manufactures their own cloth bags that are perfectly designed to work with this particular diaper pail system. 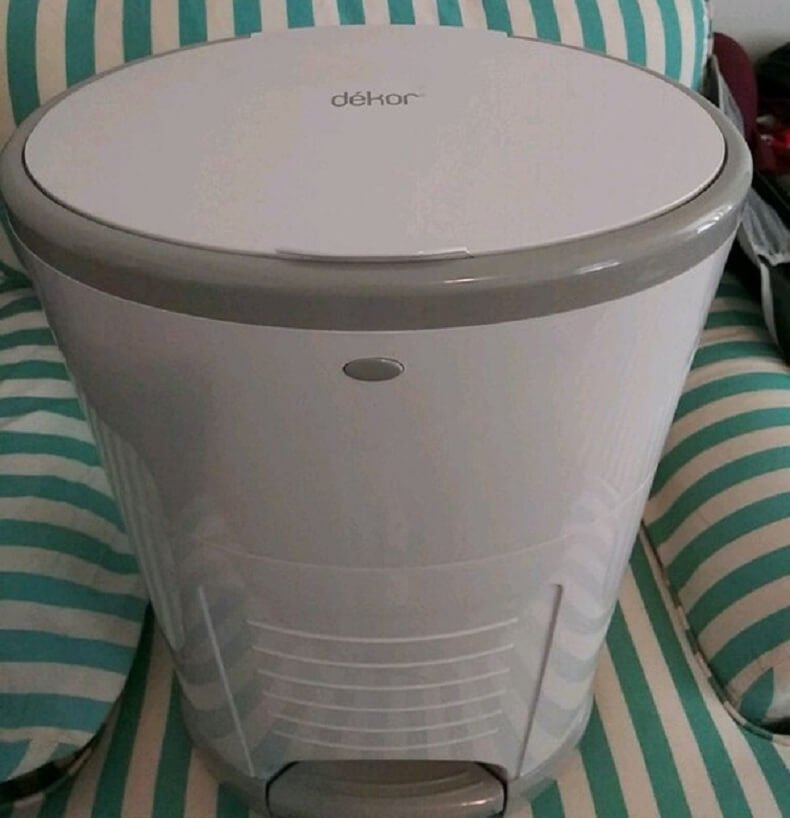 Check out what this nifty diaper pail has to offer! It literally checks off every single one of my desires in a good diaper pail— and then some!

Hands-Free
The helpful foot pedal opens the lid without a fuss. No hands required! This is great news when you’ve just finished changing a particularly messy diaper (you know what I’m talking about) and don’t want to have to touch anything before washing your hands.

As far as construction, the pedal feels solid. I wouldn’t be worried about it breaking with normal everyday use, and I’m not easy on these kinds of things.

No fancy diaper containment system
Gone are the days of having to push, shove, and twist diapers into the pail just so they could be individually packaged for odor control (more on that in a moment). With this pail, you just step on the pedal and drop the diaper in! Those other systems may be great for disposable diapers (although I’ve personally found them annoying), but they definitely don’t work for cloth diapers. Imagine trying to remove diapers from individually-packaged plastic bags. What a pain!

But what about smells, you ask?

Second Flap Door For Smell Containment
This second flap door has a super light spring, so when you drop the diaper onto it the diaper will usually go through without a problem. The only issues I’ve had with this door are:

I haven’t found either of those problems to be a deal-breaker in any way, but I did want to mention it. When this happens, I’ll just push the diaper in, instead of letting it just drop, and sometimes I’ll have to touch the flap door to loosen it and allow it to come back up again. Not a big deal at all.

Plastic & Cloth Bag Options
I have used this pail with both, just so I could give it a more complete review. 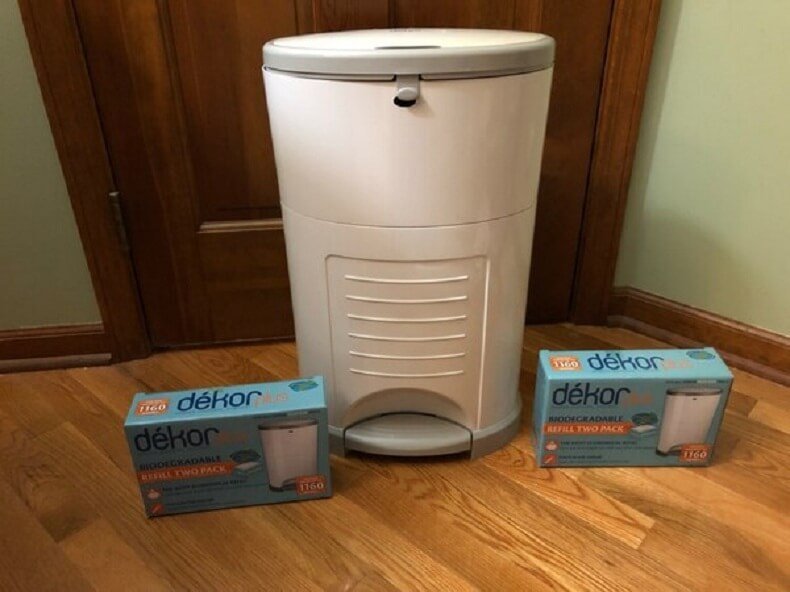 Dékor Diaper Pail Bags
When you buy the pail off Amazon, it automatically comes with a roll of plastic for disposable diapers. I don’t think there’s any way to opt out of that. The unroll-and-tie method Dékor uses is actually rather fascinating. It’s one continuous roll of plastic, and when your bag is full you just pull it out, cut it on the built-in r(azor-sharp!) cutter, and tie at the bottom.

I start off with disposables the first 6 weeks after my babies are born, since I try to take it really easy for optimum recovery (and I’m usually behind enough on laundry as it is, so I don’t want to add more during my bed rest). The plastic was perfect for those first few weeks, and then when I started cloth diapering I switched over to the cloth bags.

While using cloth diapers you wouldn’t want to use the Dékor free liners that come with the pail, for the very reason they are ideal for disposable diapers. The disposable pail liners are continuous plastic sheets, whereas the reusable pail liner has a waterproof coating on the inside to prevent leaking and wicking through of wet diapers. 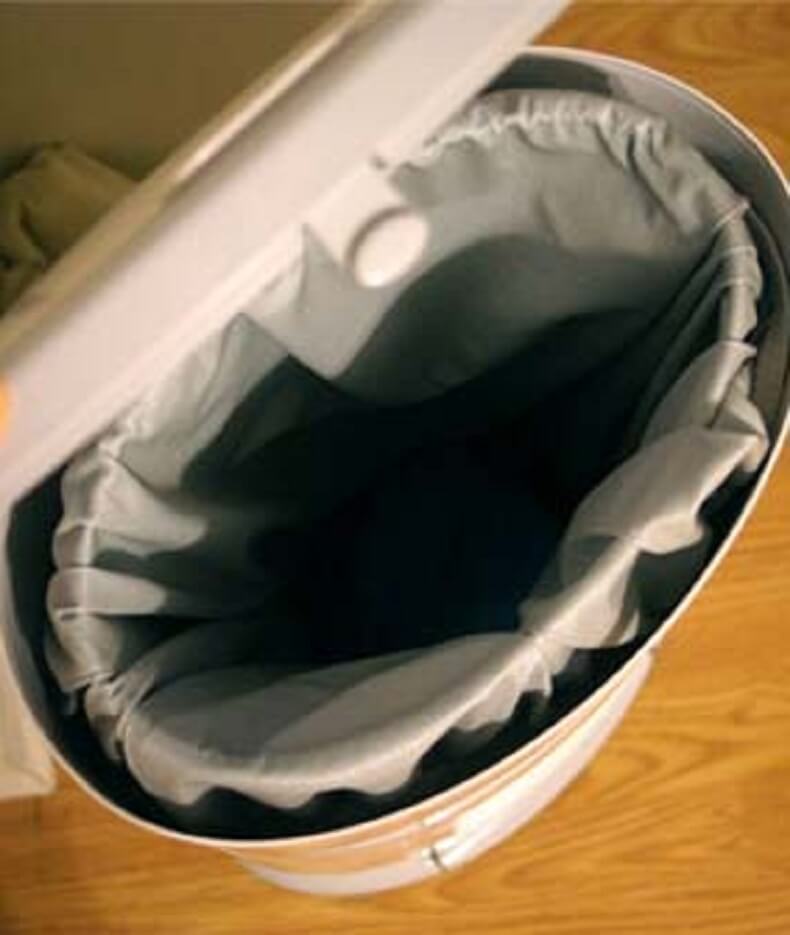 Dékor Diaper Pail Reusable Liner
The cloth bags (found here) are obviously much different, but they have their own perks. The washable/reusable nature of these bags is clearly the biggest selling point for cloth diapering mama, but I’ve found that they have some other selling points as well.

The draw-string on these bags keeps smells contained, even after removal from the pail itself.

These bags are just the right size to hold about 1 ½-2 days’ worth of diapers, which is just about exactly how long I want to go before washing a load of diapers.

Easy Bag Insertion & Removal
I was worried that removing and inserting bags would be difficult or cumbersome, but I was pleasantly surprised. The plastic bag removal process is slightly easier than the cloth bag removal, but they’re both a breeze. Neither takes any time at all, which is exactly what I need as a mom of 4 littles.

I want to quickly point out the pros & cons I’ve found with this diaper pail. I’ll admit, I have found more pros than cons, but the cons still bear mentioning.

After using this diaper pail for a couple of months, I can honestly say that I wish I’d gotten one a long time ago! This is a baby product that I will certainly be recommending to new mamas, whether they cloth diaper or not.

The designers of this diaper pail appear to have put a lot of thought into how their product would be used; from the kind of plastic it’s made of, to the multiple scent-barriers and hands-free ease of use. I don’t feel like they skimped on the quality or design, and I really appreciate that about this product.

This diaper pail is an impressive and very useful tool, and I’m glad to have it in my cloth diapering life.

Get all the latest content & giveaway notices delivered to your email every Thursday, when new posts are available. You may unsubscribe at any time.