You can find the Diaper Genie on Amazons’ website here. Be sure to check out all of the reviews on the bottom of Amazons’ product page!

Why Does a Diaper Genie Need Modifying for Cloth Diapers?

There are two Diaper Genie models available right now: there is the Diaper Genie Complete and the Diaper Genie Expressions. Both models are made with disposable diapers in mind. Dirty diapers deposited into the Genie drop into a chamber with a liner that is twisted closed to keep the smell contained and then a new section of the liner is made ready for the next smelly installment (if you have an older version), or there is now a one-bag style for a hands-free drop-in. The job of the mechanism is to keep you free from having to handle the dirty diaper and to keep smells contained.

If you use this pail for cloth diapers, as it is originally made to work: you will have to reach in and get the bags, cut open and untwist the sectioned bags, one at a time, and get the dirty cloth diaper out of the bag and into the wash. With the newer version, you just need to empty the stinky pile in the bag, into the washer. Using the Diaper Genie as marketed, with its unique mechanism, also requires using the expensive brand-name liners. For these two reasons, some people remove the Genie’s mechanism and some ”borrow” the round bag holder and repurpose it.

Removing the Mechanism in the Diaper Genie

If you have a screwdriver, you can remove the mechanical parts of the Diaper Genie in about five minutes and use it as a regular diaper pail. You will still need to figure out how to keep a pail liner in place, but you can use your Genie for cloth diapers. This seems like a decent option if you have a used Diaper Genie and are looking for a small container with a lid and carbon filter for odors. However, if your Diaper Genie is new and in the box, it might be best to consider another option. If you keep the Diaper Genie, or if you choose to use it without removing the mechanism, you will want to consider the different alternatives for liners that are inexpensive.

If you use your Diaper Genie as a diaper pail, there are quite a few options for lining it. The first is to use wet bags that can be purchased or made. Instead of using the expensive Genie refill bags, you use a wet bag made to fit in the Diaper Genie. There are multiple sites online that sell manufactured or hand-sewn liners and multiple sites that give directions for how to sew your own liners.

Using a Pillowcase as a Liner

This is definitely the cheapest option, especially if you have used pillowcases in your linen closet. This is also an environmentally friendly option because you just throw the pillowcase in the wash with the diapers and reuse, no plastic waste to discard. Lastly, it can be an easier option because there is no sewing involved.

If you receive a Diaper Genie as a gift, there is no up-front money invested in trying it out. However, if you like it and want to keep using it, the refill bags can be costly, about twenty dollars for three refills. Some frugal and creative parents use 13-gallon garbage bags with drawstrings instead of Genie’s pricier version. If you also use garbage bag coupons, you can save hundreds of dollars over the years your child is in diapers. There are several videos online that show you how to replace the trademark liners with your average garbage bags. According to Thriftyskate.com., using generic garbage bags is 90% cheaper. Some customers do complain that garbage bags don’t keep the smell contained as well as the seven-layer Genie bags, so trial and error is best for your individual situation and nose.

Using a Net Laundry Bag in the Diaper Genie

The net laundry bag, if large enough, stays in place better with its netted material, than some slippery plastic liners. However, the point of a liner is to keep all the nasties from being leaked into the pail. Since the netting has holes, it will allow for more seeping into the pail that will need cleaning out. The water will need to be dumped, and the pail will need to be cleaned often. 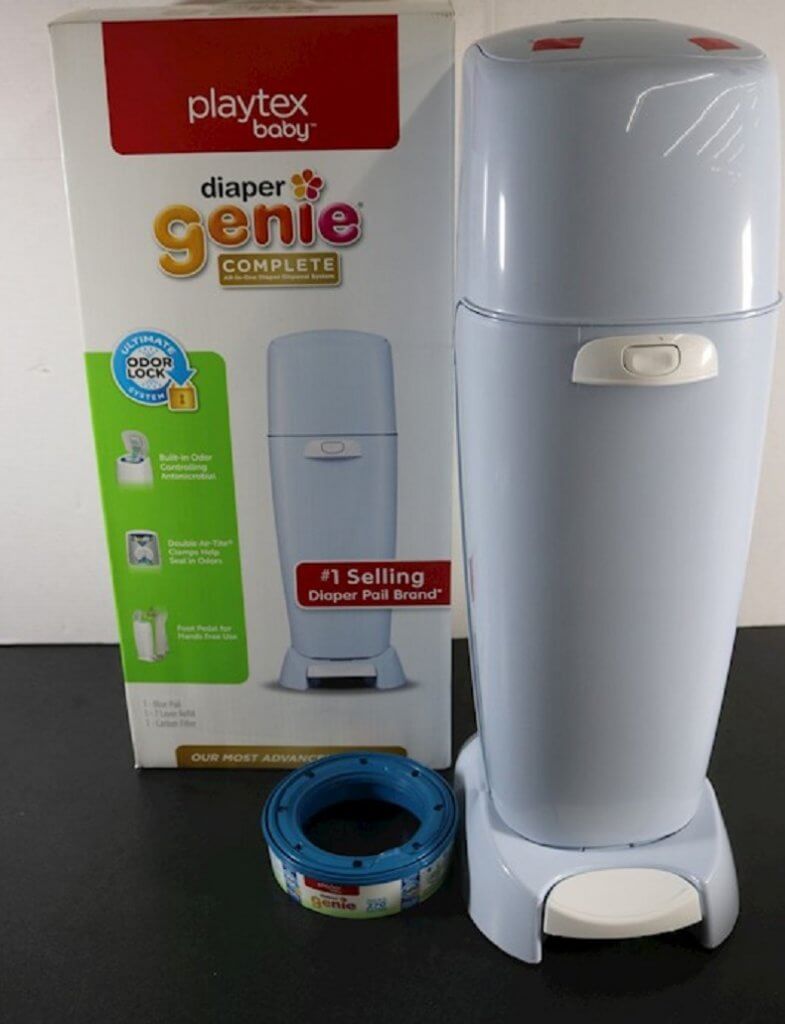 If your new to cloth diapering, start with our Cloth Diapering 101 article.

The History of the Diaper Genie

Parents with children born before the 1990s did not have the magical choice of the Diaper Genie because it didn’t come out until the 90s. It is one reason parents started transitioning from cloth diapers to disposable diapers. For over a decade, Diaper Genie owned more than 80% of the diaper disposal device market. It wasn’t until the 2000s that quality competitors entered the market. For example, the top-rated Munchkin diaper pails didn’t start their original version until after 2005. So, if you wonder why the Diaper Genie seems to have such a loyal following, it was the first and only option for years.

The Idea for the Diaper Genie Begins in Britain

The Benefits of the Diaper Genie

At the bottom of the Diaper Genie Complete, there is a foot pedal so you have one hand free for the diaper and one hand free for a squiggling baby. The Diaper Genie Expressions has a push-button on the top of the pail that makes the top flip open. Even though the Expressions line is more attractive, newer moms might want the convenience of the foot pedal. The Genie Complete is also taller so you do not have to bend over as far as you do for the Genie Expression. Most importantly, both Diaper Genies are built with an antimicrobial odor-controlling element, have a tight-fitting lid with two airtight clamps, and a carbon filter. The lid and tight clamps also mean the baby won’t be able to dump the contents.

The Cost of the Diaper Genie

The Diaper Genie Complete can be purchased for under $40 and the Diaper Genie Expressions runs about $50. Both models use the same bags, but be careful if you notice deals that look cheaper: some will say they offer a cheaper price and not tell you that their bags hold 30 diapers less per bag. The refills also come in biodegradable and nonbiodegradable if you are interested in helping the environment, choose the liners with biodegradable stickers. The Complete comes in solid colors (white, gray, blue, pink, green), and the Expressions offers different colored sleeves, that pull over the solid colored pail, to match your nursery design, that cost under $15 and are usually sold separately from the device.

So, if Aunt Mary gave you the Diaper Genie, you have the required information to make an informed decision about whether to keep it or not, and whether you will become a Diaper Genie advocate. Using the Diaper Genie is not the top choice from parents who actually use cloth diapers, but there are a lot of hacks to make it work. There are also lists of top choices for cloth diaper pails and parents’ opinions, and this information is valuable to anyone making a cloth-diaper-pail decision.

How Many Flip Diapers Do I Need?

What do you really need to cloth diaper?